Our plan for Vietnam is to reach Ho Chi Minh city which is at the far south end of the country. We wanted to make some progress so decided to make a good chunk of progress and head to Phong Nha.

We were debating between Phong Nha and Ninh Binh which seems to be a similar town, but Nin Binh is just outside Hanoi so we decided on Phong Nha to make a little further progress.

Both are small towns just outside of national parks. At first glance from the guide book, it appeared Nin Binh would be easier logistically to access the attractions since they were all right by the city. From the guide book it said to reach Phong Nha first you had to go to Dong Hoi and then arrange some transportation from there. However, after talking to our hostel we discovered a tourist bus that would bring us straight there. For 55 bucks we got a ticket for full transportation all the way to Ho Chi Minh city with stopovers in any city we wanted for as long as we wanted. The ticket could be somewhat cheaper if we opted for less stops but we wanted to keep our options open.

The bus was a sleeper bus, which meant it had bunk beds that reclined with a bed in them. Never seen anything like it.

The beds were made for Vietnamese-sized people so needless to say I didn’t fit all that well. Regardless, I managed to sleep waking up about once an hour. The bus was very new and modern.

Half way through, we stopped at a bus stop that had some amazing marble sculptures, like the ones you see at multi million dollar mansions. They were beautiful and there were so many of them! 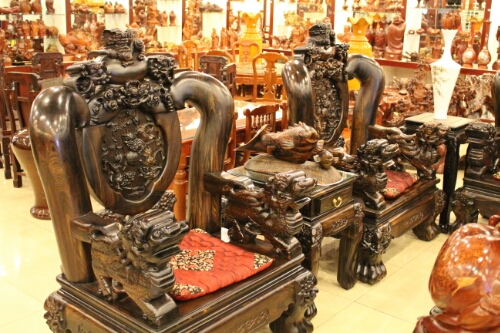 The bus left around 7pm and we arrived in Phong Nha about 10 hours later. The bus dropped us right off at a hostel some other backpackers were going to and since we didn’t know where to stay and it was 5am we opted to stay here at Easy Tiger hostel. I didn’t expect this to be a huge tourist destination but there were quite a few travelers here and the hostel was fairly busy. Not the nicest I have been to, but the staff were great and helpful and seem really interested in helping out the local community.

About Phong Nha- It is a small town right outside the Phong Nha national park. Apparently tourism just blew up here about 4 years ago- you can tell tourists are still new to them. The people are extremely friendly- the little kids are always saying “hi” and giving high fives. The local people are hospitable and welcoming always smiling.  The local people survive mostly off farming and logging. 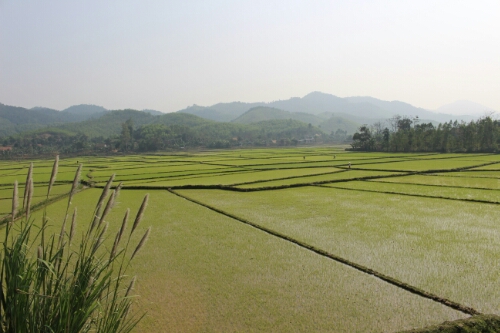 The national park is very protected. The tours here are very expensive because of the national park fees (~$50-250). What Phong Nha is mostly known for is its cave systems, including the worlds world’s biggest cave.

There are still tons of unexplored caves and undetonated bombs and land mines from the Vietnam war is another reason they don’t want people wandering the national park without an arranged tour.

Given the options and the fact that we had just dropped a good chunk of change on our Ha Long Bay cruise, we opted to go the cheapest route which was a tour to the Phong Nha cave which is the biggest cave in the world.

Our hostel arranged a group together for us since the bigger the group the cheaper the boat ride was. The twelve of us walked to the ticket office and paid around $13 a person for the boat and entrance to the cave. 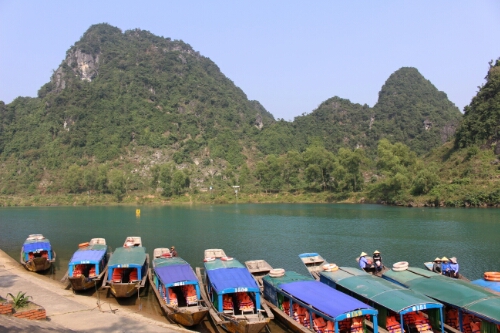 The boat took us about 30 mins down the river where we saw tons of the locals working in the river pulling out what appeared to be.. seaweed?

We approached the cave entrance

Inside was definitely impressive. Much bigger than the cave we saw in Ha Long bay.

After bringing us through in the boat for about 15 minutes they dropped us off so we could walk around the cave back to the entrance to get back in the boat. They had a guy in the cave yelling at us whenever we went somewhere we weren’t supposed to.

During the Vietnam war, the american troops were camping out in this cave and storing ammunition. For this reason, the cave was constantly bombed and there were still damages visible on the cave entrances.

We caught the boat back and walked back to the hostel. At this point, I started to discover I had food poisoning from the hot dog I had at the bus stop the day before. No fun. So I proceeded to shit my brains out and sleep the rest of the day and night.

Jose didn’t want to stay another day but I still wanted to see more and not rush out of here, let alone the fact that I was dying and constant diarrhea is not something that is fun to travel with on a 5 hour bus ride. I won the battle.

The next day we rented mopeds from the guy across the street for 5 bucks. Our hostel gave us a route of a circle route to take for some scenery and for access to the other caves.

We followed the route out of town which was about 60kms or about 3 hours. It was a beautiful drive and we were able to interact with the local people, including helping unload a big truck that we could not figure out how got in their current dilemma for 45 minutes so they could be towed out. 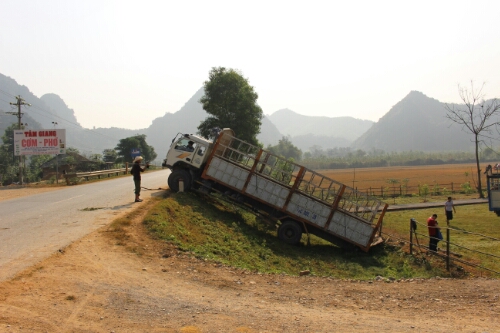 They were thankful and offered us fifty cents and cigarettes for our help but we passed.

Moving on, we drove up and down winding mountain roads with fantastic views. The weather was perfect. 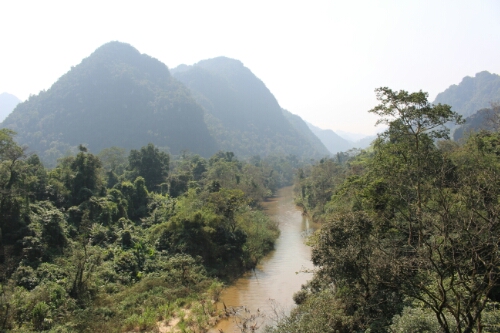 It was good being able to get out a little bit and really get the feel for the town. I wish I could have discovered a little more hiking down random trails or random caves or whatnot.. but that didn’t happen. The guy that works at the hostel found a detonated land mine in a cave and was showing us- I wanted to find something like that cool souvenir.

Every attraction we saw along the loop required fees to get in and it wasn’t cheap- although we heard that Dark Cave had a really fun zip line/swim in the cave/swim through mud tour, for 150 bucks I don’t think it was worth it. We already saw a cave, see one see em all.

We refreshed at the hostel for a few then headed back out to try out this coffee supposed to be really good by the guy that discovered the world’s biggest cave- some chocolate coffee. Too sweet. I wasn’t too impressed.

Next stop is Hue, a small town that I don’t really know too much about. Bus leaves at 4:30am another sleeper bus. 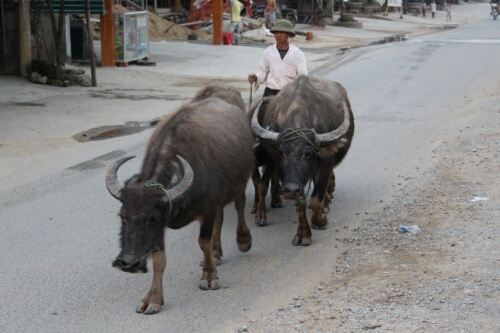