After getting a contrasting a couple places we booked a bus for $8 to Halong City.

Everyone else on our bus was on a tour and we were the only ones just booking the bus. The bus actually dropped us at a cruise terminal 3km from the city. Here lots of people were trying to hustle us to buy a cruise telling us that cruises only left at that time of the day. Rather than be pressured into making a bad mistake, we opted to instead take our time and stay in the city one night.

We walked the 3kms to the city and onto the main road where the hotels are, on D Vuon Dao.

Here we booked a hotel room for $10 a night with a beautiful view of the city.

There were very few tourists in Ha Long City since most people opt for a tour straight from Hanoi. In hind site, I wish we had booked a trip straight to Cat Ba Island from Hanoi since this is supposed to be equally beautiful but less touristed and less polluted. But, if we were to do a trip to Ha Long Bay like we did, we should have just booked the tour straight from the city. So, basically we messed up. Happens.

As we were to find out, it is true that the boats only leave at noon each day. So we were basically stranded in Halong City for the day so we decided to walk around and explore.

There was a nice promenade along the water so we strolled for a few miles.

Everyone hustles in Vietnam, but it was more intense in Halong City as like I said there were very few tourists. We couldn’t walk 10 feet without someone trying to hustle us into their hotel room, give us a ride on their moped, stay at their hotel, etc. I think they see us as walking dollar signs. It was frustrating but we learned just to ignore them as they don’t take no for an answer if you try to politely decline.

We ended up grabbing lunch at a place with seafood (all the restaurants seem to serve the same thing). The food was excellent.

We spent the rest of the day shopping around for a tour. We did our best not to get ripped off but it is difficult. Apparently there are three options for cruise boats: 5 star, 3 star, and Standard. We were advised not to take Standard as the boats were not up to par. So we booked a 3 star boat and paid $120 per person for a “two day” trip. This two day trip would turn out to be less than 24 hours, as they include the shuttle from Hanoi as part of the day as well as your drive between hotels picking up passengers. We would later find out we could have paid $95 for the same tour from another travel agency. We would also find out that the boat they sell you on would not be the boat we would take. They will say anything to sell you something and it is rare to find someone who speaks decent english so the language barrier is challenging.

The next day and noon we caught the bus to the cruise port. Apparently there is more than one since this is not the port were at the day previous.

We had to wait around in the port for an hour or so until we met our tour guide. Although our boat could carry 16 guests, there was only us and an older couple from San Francisco.

The boat turned out to be very nice, had a lot of character.

Can't complain about the view

Halong Bay is beautiful and one the the 7 natural wonders of the world. Although beautiful, there is garbage everywhere in the water which is a shame. The guide said most of it comes from the sea since it connects to the open ocean. Us humans are dirty. 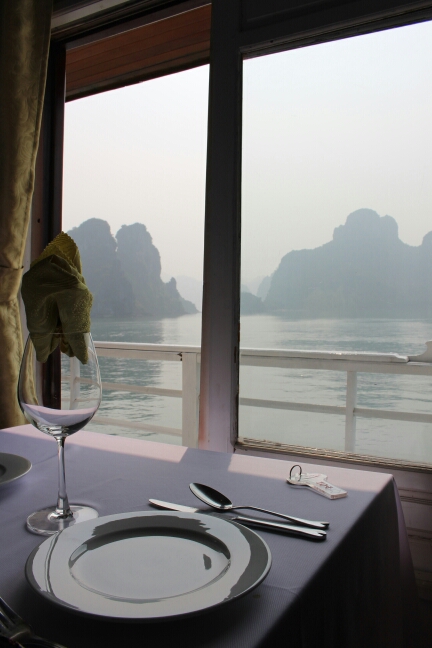 Apparently Jose and I were a couple on this trip as although there were 6 extra open rooms they made us share a room as well as Jose’s cold. All the food was served on shared plates and they were even kind enough to give us rose petals on our table for dinner.

The food was delicious, every meal plentiful and very good food. 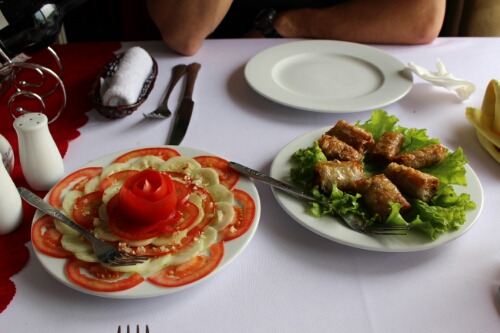 Everything on the cruise was very regimented. We were told Halong Bay management tracks each ship and tells them where they can dock and where they can go when. There are 2-300 ships in the water at any given time. We had a strict schedule to follow for everything. This place reminds me a little bit of the Galapagos in terms of the whole cruise experience, and a little bit of some kayak trips I went on in New Zealand.

Our first stop was a 45 minute stop at an island where we could swim in the garbage water and hike up some steep stairs for views of the bay. 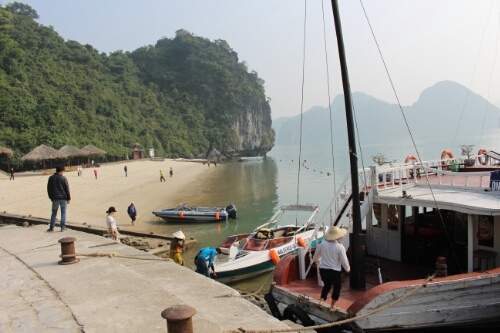 The hike up the stairs was pretty steep but only a 5 minute walk. Great views. 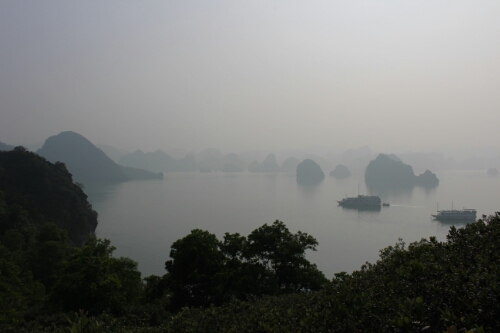 Halfway up the stairs there were monkeys to entertain us on our break.

I took a quick swim and we jumped back on the boat. Our next stop would be kayaking.

There were only double kayaks available which made sense for Jose and I’s honeymoon. Kayaking was beautiful and we went through a couple caves. 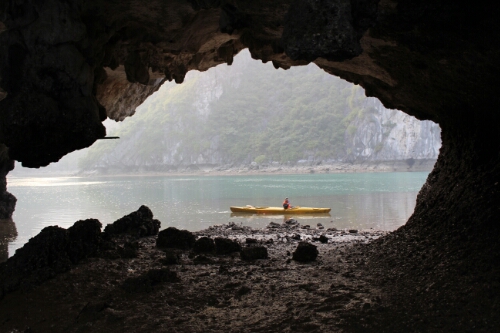 The kayaking lasted about the same amount of time. We reboarded our boat and docked for the night. 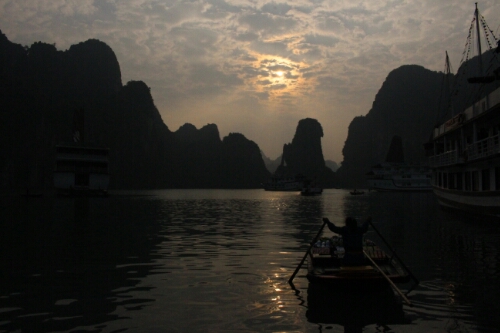 At night we did some shrimp fishing but everyone quickly gave up since no one caught anything and lets face it, fishing sucks. Jose and I went to sleep in our cute little ocean view bedroom at 8pm.

The next morning we were woken up at 6:30am to start our day. The plan was to head to a cave then back to shore for noon to catch our shuttle back to Hanoi.

We were the first ones in the cave since all the other tour groups had large groups. The older couple on our ship had departed to go on another ship (they were on the 3 day cruise agenda) so it was just Jose, myself, and our guide. The cave was impressive.

It was about a 30 minute walk through paths throughout the cave.

Once back on the ship we started our journey back to shore. We would be served one more lunch.
Along the way in the bay, the people do not stop trying to hustle us. They chased us down in a little boat and sold us some water and handed it up to us in a net. 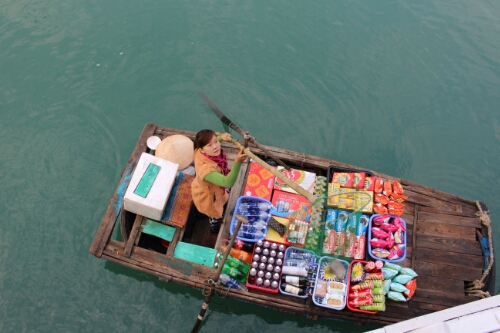 She sold big jugs of water for two bucks but on the ship all they sold was tiny bottles for a dollar that I would have drank twenty of in 2 days.