Our flight from Cartagena to Bogota went smoothly. The last day in Cartagena I got sick for the 3rd time. Horrible stomach ache, diarrhea, headache, weak, and was freezing. It was the sickest I had been on this trip, as I laid in bed I contemplated going to the hospital if it got any worst.

I had some travelers diarrhea pills (antibiotic?) So I took one of those. I woke up an hour later sweating because I had so many layers on. My chills were gone and my stomach ache was much less. I had waves of stomach pains for the next few days. Katie was soon to follow, and not far behind was Jeremy. We pretty much slept most of the day for the next two days. Our (flu?) Was followed by a cold.

Bogota is also very high in elevation so that also could have contributed to our tiredness and sickness.

There was a gold museum that we heard both good and bad things about, which we didn’t end up making it to.

We did head up to Santuario de Monserrate, which was a church with a view of the city. We were told it was about a 50 minute hike to the top.

We walked from our hostel and found it a little tricky to get to. We started to cut up a hill but two women there told us not to because it was peligroso (dangerous)

I wanted to hike up but Jeremy and Chris didn’t so we took the cable car. It was just over 7k pesos.

At the top we went inside the church

And looked at the views

I forced Jeremy and Chris to hike down even though they wanted to take the cable car.

It took us about 45 minutes or so and was stairs the whole way. 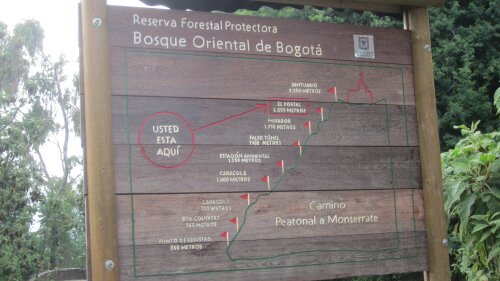 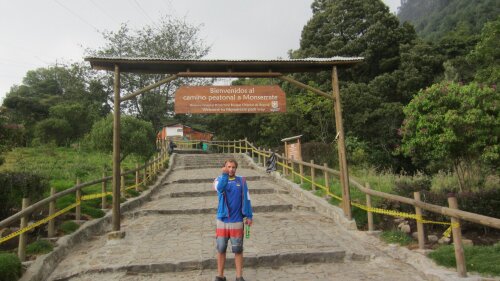 We went out a couple nights, but it was completely dead since we went out on a Sunday and Monday. Apparently Tuesday is “Gringo Tuesday” but I am going to be gone for that.

I found Bogota very sketchy. There were cops everywhere around where we were staying and some armed guard. When we walked in the streets at night they were vacant besides beggars and disheveled drug dealers that would follow us around and wouldn’t listen when we said no. For this reason we caught a cab back from the bar.

My flight was 1030 am the next morning. Before I checked in I had to get something stamped regarding a departure tax I believe. It was $35 but I didn’t have to pay since I think it was included in my ticket from Kayak.

I went through the normal customs drills if I had been given any luggage, the purpose of my trip, etc.