This morning I was a little hungover, but I had already told Jon last night that that I would go canopying with him again. I kind of regretted the decision at the time, because I had already gone and wanted to do something new.

But when we got there, it was very different location (San Martin) and in the end I was very glad I went. Overall it was an awesome experience.

After eating the same exact hostel breakfast I have been eating for 6 days straight, were picked up in a van at 10 and shuttled over to the location.

This zip line first brought me down between two canyons over the river. They wouldn’t let me take my camera with me on this part because it was too fast, up to 120 kph. It was scary when they stopped because it ends in a cave and you are going so fast, head first into the wall of the cave. 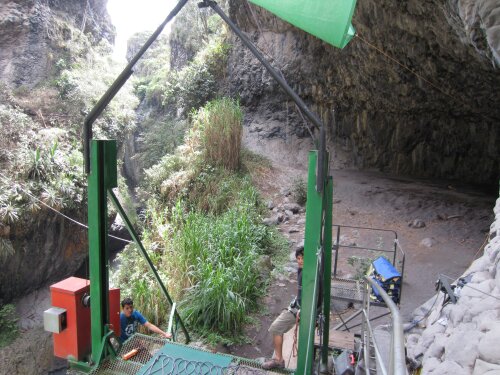 At the end of this part, there was a staircase strung by 2 cables between sections of the cliff, it was about 100 feet long. This was pretty fun to walk across definitely got my blood moving. We were cabled in with harnesses so it really was pretty safe.

Once we climbed this part, we had to hike up a good section of the mountain. It was much longer than I had anticipated, hard to say but maybe 200 feet? Here there was also cabling to hold you in. In spanish he quickly told us to keep make sure there were always 2 carabiniers attached at once so we were always connected. 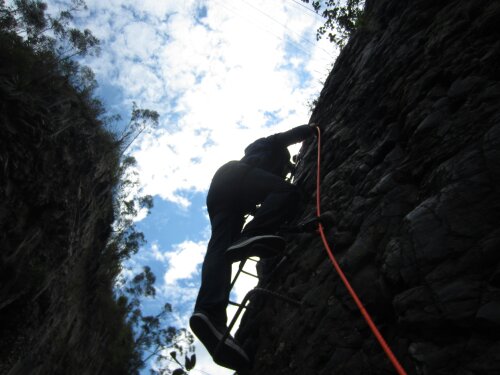 After this, there was one more sideways stretch until we reached the next platform. 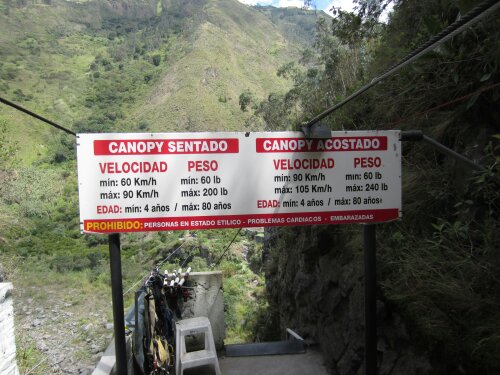 The ride back was pretty cool, at the end you could sense your speed because you went real close by the people waiting there, in the canyon it doesn’t feel like you are going that fast.

When we got back, we grabbed our lunch from the same place down the road, felt like a home made meal by grandma. And only $2.50?? Still can’t get over how cheap it is, she must make $1 profit off the food she serves. Fresh mango juice with rice, chicken, salad, and soup for nothing.

I took a nap the rest of the day, sent out some postcards, basically relaxed. Met a few new guys and went to the hot springs. 3rd time now, love that place. Whenever I get out I just feel so warm, rejuvenated and relaxed.

It dawned on me today how much I love this place. There is just so much to do, and the weather has been holding up. The week went by so fast. I have good friends here and just feel so comfortable, feels like home.

However, Jon is headed out tomorrow and Jose and I planned to as well. Jeremy now wants to come to Colombia with us, and his training for his gliding isn’t done until tomorrow at 4. So Jose and I plan on renting a couple of the buggies and trying to see the volcano, since I still haven’t since the weather has been crap and I have been doing so much else. I also want to try “puenting” which is a giant swing from a bridge. Supposed to be awesome.

When Jeremy gets back we are going to head the 4 hours North to Tena. Tena is a huge kayaking destination and supposedly there are kayaks laying around at every hostel, there is also caving, white water rafting, and jungle trips.

The owner at my hostel told me that the jungle trips here really are not worth the time, and that we should head out of Tena.

Tena is the second best destination, but an even better one is about 8 hours away and is out of the way north to the border. The owner of the hostel said we should see insects, birds and lots of monkeys from Tena. There are river dolphins and crocodiles etc in the further away location. It is also more expensive from that location because it is in a national reserve.

I really will miss this place. What used to be a strange, foreign city now feels like a safe home where I have friends and know how to get around. I have had so many amazing experiences here, not sure yet, but I think it might be the best place I have ever traveled to.