So we ended up driving until about 1am with an hour left to our beach destination, and were so tired that we decided to just sleep at a truck stop.

It was semi sketchy and really stuffy in the car so we didn’t sleep too well. At 3 am we both woke up and decided to just continue our drive.

Since we had blindly entered an arbitrary point into the GPS in Rio de Janiero, it was bringing us inland on the main interstate (116) since this was the fastest route. This was a quick, 3 lane freeway. So we changed the GPS to head us to the 101 coastal road so we could stop by the beaches as planned, cutting across on SP-171.

This probably added 3-5 hours onto our trip since we had already been headed inland we had to head back out to the coast.

SP-171 was a crazy windy road with some great views (but I was sleeping), and we caught the sun rising just before we reached the coast.

Finally we reached the coast. There were tons of beaches many without even having names the entire length of the road.

We drove up a little further and after a 10 minute ride down a really bumpy road we ended up on another beautiful beach.

We came close to running out of gas when we ran into the city of Paraty. A small city again a rich person’s playground. We actually saw some huge yachts and an airport. We also visited the beach here. 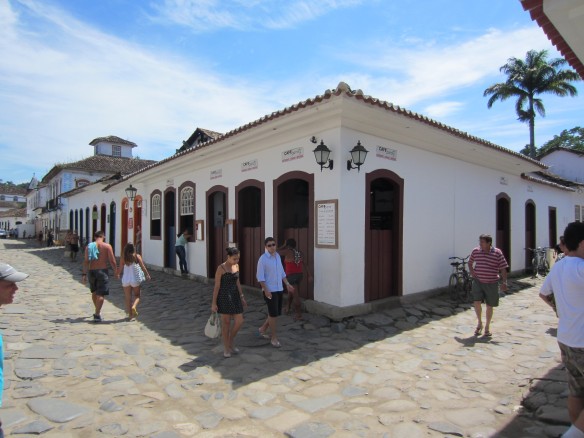 We decided to go food shopping since we were so sick of the salty food here. Everything has salt, even the water. I think the people don’t know any better. I went to pick out a mango and the cockroach running around in them turned me off. It was the biggest food store I have seen here.

We drove further to another no-name secluded beach. It was about a 10 minute hike through the lush forest. The water was very warm.

We drove a little ways up the mountain and there was a fantastic view.

And… a little further down the road we saw a crowd on a beach so we decided to check it out.  I believe the name was Praia Brava.

We entered our hostel address in Rio into the GPS and it brought us some back country mountain roads all the way there. 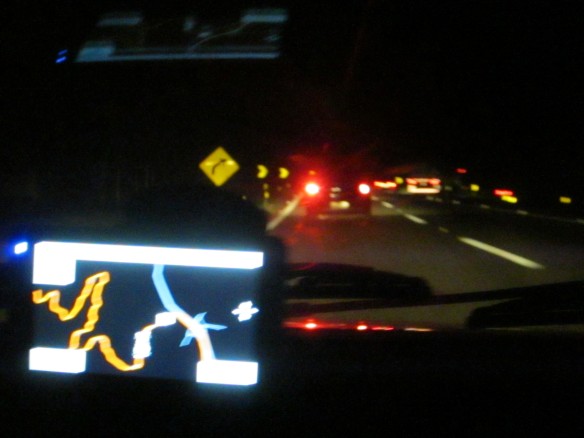 A little ways in we decided to hike up on top of a random hill off the highway and there were also some fantastic views around sunset.

The drive took us much longer than anticipated; in total probably around 16 hours. Gas runs the equivalent of about 5 dollars a gallon here so it also gets expensive. Luckily we were running a little 1.4 liter chitty bang bang. We were getting very impatient with the drive and were ready to arrive at the hostel.

When we finally got to the city (around 9:30pm) it was dark and we took a wrong turn. Apparently it was the worst possible turn we could take as it took us over a 7 mile bridge and added 20 minutes to our trip, as well as an additional toll.

It was very interesting driving through the city and seeing all the Favelas and infrastructure. I was very impressed with the highway transportation system it is very modern and efficient. There were toll booths about every 45 minutes which got annoying (costing anywhere from 1.80 Realis to 9.80). The people are crazy aggressive drivers I have never seen anything like it before. Wreckless and dangerous; they probably don’t know any better. They drive motorcycles in the rain with no tail lights and swerve around traffic! On the side of the highway on the outskirts of the city the Favelas started showing up. They were extremely shitty run down slums, and right amidst everything else modern and nice in the city. A Mercedes dealership would sit right next to a slum. The “developing” part of the country is very evident here.

We finally got downtown in the area by our hostel in Lapa and there were protests and cops with shotguns and pistols. There was so much commotion the city was huge we didn’t know what was going on and we were exhausted. We drove down the road which we thought our hostel was on and it was so trashy; old broken down buildings garbage everywhere, we saw one kid throwing cans at another kid. Sketchy/scary place. 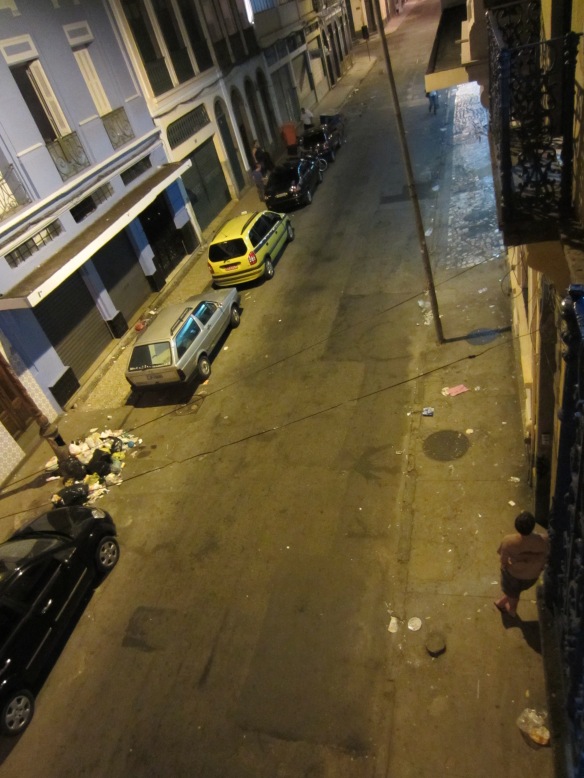 We asked another hotel if they had heard of Lapa Hostel on Rua do Rezende and they hadn’t. So we went back to the sketchy area and parked and we got moved in.

I don’t know how this place got such a high review on hostel world; as far as I’m concerned it’s in a super sketchy area. We will see tomorrow maybe I will feel different during the day but first impressions of Rio is THE sketchiest citiy I have ever been to.

On a side note, my credit card got fraudulently used so they put a hold on my card. Also, I think I hear gang fights outside. Also, I forgot to mention that I saw prostitutes at the bus station outside the city. Classy place!